What does this suggestion change/add/remove:

I personally feel like infantry regiments are just downgraded special ops regiments and are not unique in their own way, I also don't see the point to join an infantry regiment when you can join special ops and have everything that an infantry regiment has and on top of that the ability to base raid, I would also rather join 1stAL / JAC than IVG / 15th because you get very similar weapons and the same AT job and you are also able to gun / drive IFVs and MBTs for the cost of a one slot recon job that is locked to MSGT

1. Grenadier
1 Slot MSGT job, gets a m9k granade launcher, if too OP their primary weapon wouldn't be a reg kit but a short range SMG, like a mp7 (that they get with the nade launcher)

2. Auto rifleman rework (IVG / 15th only)
This would be a change to the current job, it should get a new swep that spwans an ammo crate, like the small ammo crates from the tac tablet, The spawned crate would have 5 ressuplies and it would take 5 minutes to spawn it again

Possible Negatives of the suggestion:
- Could be too OP (but can be easily tweaked) I don't know how much damage the m9k launcher does to vehicles but it should be close to none, it's primary use should be dealing with infantry


Based on the Positives & Negatives, why should this suggestion be accepted:
More regiment individuality
Last edited: Aug 4, 2022
Upvote 4 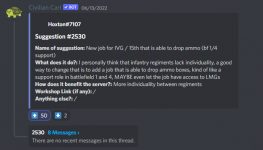 This would attract people to join the basic ground regiments and it would give people reasons to RP more on the battlefield and people with low levels start on low ammo so having a deployable ammo crate would help them if they had no ammo and it would be more fun for the new people having more ammo
You must log in or register to reply here.
Share:
Facebook Twitter Reddit Pinterest Tumblr WhatsApp Email Share Link
Top Bottom