§1.8 Is this your first application for Mapper? If not, link previous ones:​

Yes, this is my first application for the mapper.

§2.1 Do you have previous experience as a Mapper for GMod?:​

I have a great amount of experience as a mapper in Garrys’ mod working both with commissions and communities. In my works, I have created content that has been well optimized for servers utilizing massive amounts of scripts and large player counts. I have learned how to work with feedback and suggestions; answering questions regarding source and hammer with relative ease. I have mainly created maps for Starwarsrp but I also have experience with darkrp, SCPRP.

The primary experience for Garry's mod is map editing, perfecting performance and gameplay are huge factors for all my work. Ensuring that a map is fun and unique to play on is my biggest priority other than optimization.

§2.2 What source games have you mapped for and used the content of?:​

I have only released public content for Garry’s mod publicity to the workshop. I have only conducted testing in L4D2, TF2, and HL2 in order to try AI features and game-specific functions. For CSGO I created a defuse map with dev textures as an early test for myself; this project stopped due to a lack of interest in CSGO. I'll link it below in section 2.6.

§2.3 How many hours can you commit to Mapping per week?:​

At a minimum of six hours, usually, much more however IRL life goes first. Reasonable deadlines won’t be an issue.

I wish to be a mapper for the Civil Gamers community purely to assist and create enjoyable experiences for the player base. The previous community I worked with had a tendency to abandon projects rapidly; leaving maps I created short-lived and underused. I hope that by creating maps for this community my work gets to be used by the players. From my own understanding, there's a team of mappers which I find super helpful as any issue that will arise during map creation can be solved together. I’m a great fan of teamwork and hope to be of assistance to any other mapper.

§2.5 Which server(s) on the CG Network do you play on and which ones would you most prefer to map for?​

I personally play on the SCP-RP server but I do not mind mapping on any other project. I have experience mapping for pretty much every game mode, and I’m happy to contribute wherever.

§ 2.6 Have you made & edited any map before? if so attach some images showcasing your map & edit;​

First of all; I have done plenty of map editing that was never documented due to poor skills at the beginning of my mapping career. This includes edits to Downtown(Tits I believe), Rockford, and many more I do not recall. However, I also have documented edits listed below, mainly Jungle Storm, Titan Base, and the ‘Venator and Geonosis’.

Pictures can be found under the workshop link.

This map was the first edit I released to the workshop and the first project I completed. For this project, I learned how to create brushes into props. Which was used to create the Venator bridge. During this project, I also experimented with navmeshes and AI Nodes; as well as basic optimizations, i.e Areaportals, and hint/skip brushes. The project was concluded when the VMF file corrupted itself. I would be able to recreate it using a decompiler but that would not result in good things; as the decompiler doesn’t quite understand everything in great detail resulting in artifacts and errors.

The Imperial Titan Base edit was my first proper community base edit; I worked closely with the owner of the community to create this map. During the edit of Titan Base I reworked the entire skybox (In the original version, the skybox was a hollowed box); In the edit, I added proper nodraw and limited it to the sky for Air Vehicles. In this specific edit, I learned how to properly utilize most optimization tools and tactics. This was the first time I created more complex brushes and experimented with Half-Life 2 tools such as the trigger_physics_tool used to create an effect for players falling down bottomless shafts. During this project I also created several new textures using VTF edit; this was mainly community logos and credits for the maps.

§2.6.3 Junglestorm - V2 (Workshop)
This was the latest of my maps to be released to the workshop but the one I worked on the least in terms of complexity. As the edit mostly consisted of editing the map to fit the game mode of Africa RP; adding features where requested from the community such as lockable buttons, hotels, and firing ranges. Junglestorm was purely a slight upgrade from the original product.

§2.6.4 CSGO DE_Frost
De_Frost was created as an experiment to test my own expertise in map creation. The layout was constructed on a piece of paper and then slowly made in hammer. The main thing that I learned while creating this map was layouts, timings, and chokepoints. Layouts are important for navigation, and if they are too complicated players can be misled and lose themselves in the area. If the design is too easy the players will instead find themself bored having no new concept to navigate. Timings are very important in Counter-Strike; I'd argue they are equally important Garry's Mod, especially in the SCPRP server. The time it takes for MTF to move to Containment Chambers, the time it takes for GENSET to move to D-Block. Chokepoints are points where players clash in combat, these chokepoints should be dynamic to allow player choice and not to make everything be the same, every single time. I believe that maps must be a fun experience if you were to strip away everything but the map itself. 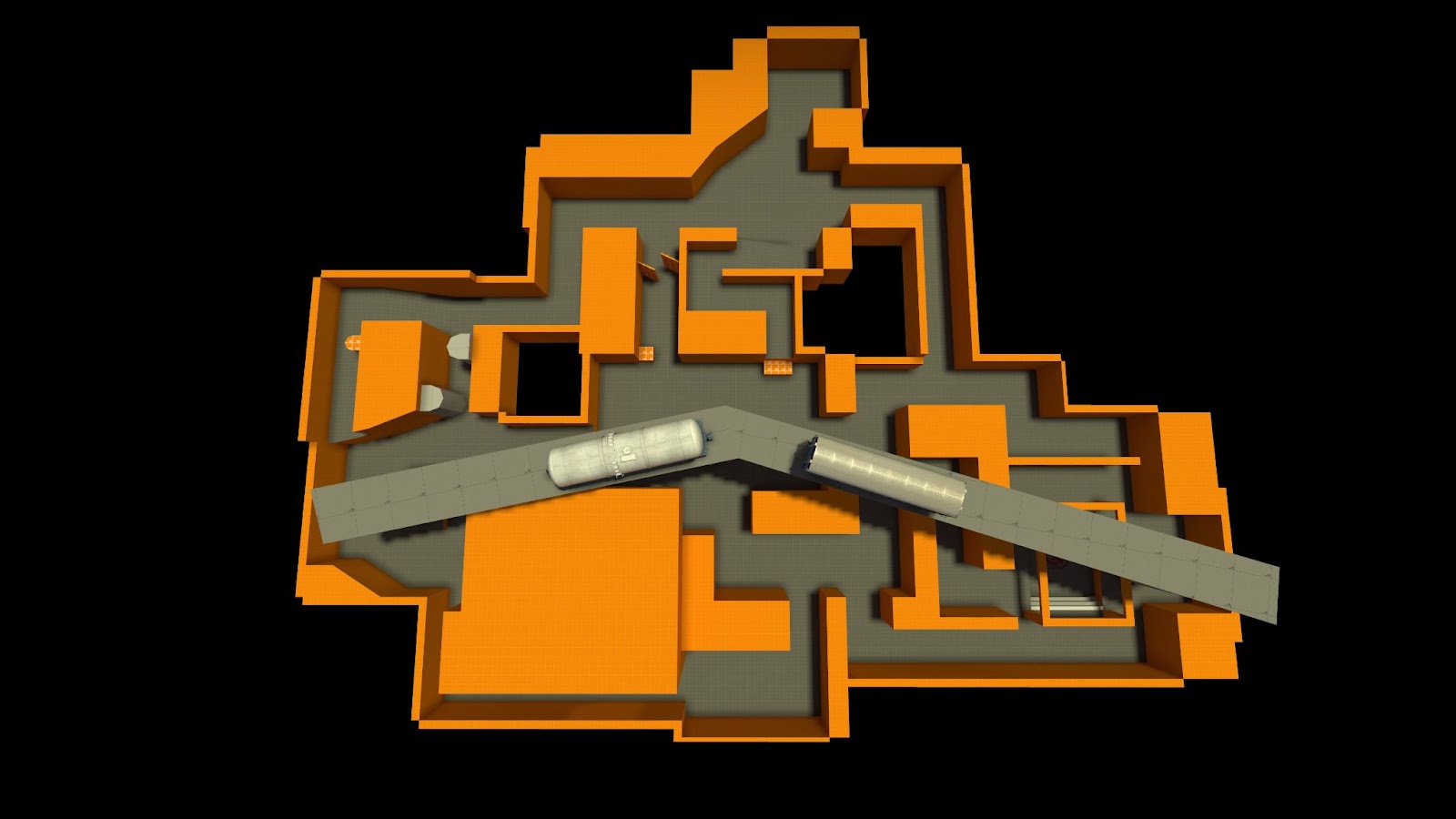 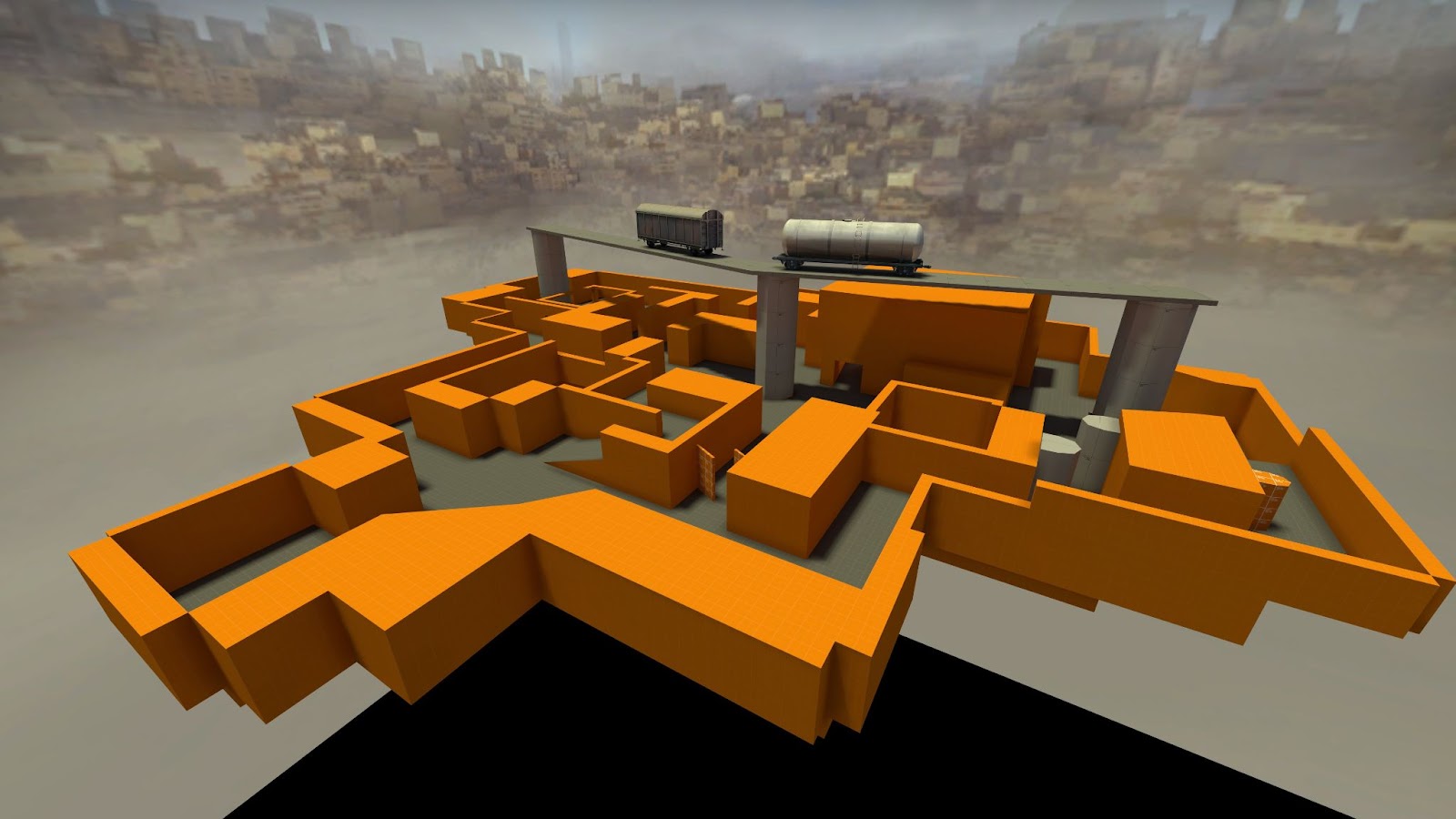 I would like to see an edit to the D-Bunks area; I am unsure what would work due to limited time on the server as of writing this. The best way to find a suitable result would be to ask the player base and overwatch the area. The things we have to consider are how Security and MTF arrive at D-Block and the current ways for Class-D to escape. Currently, there is only one final exit point for D-Class (Chokepoint ); but a few ways to enter the rooms outside of D-Block. Security Guards can quickly arrive at the location and eliminate any D-class even if a considerable effort has been made by D-Class. The one way to fix this would be having more than one exit to D-block which would create several checkpoints. This could just lead to the chokepoint being moved up depending on the situation.

An additional solution would be to extend the time it takes for GENSEC to come to D-block, this can be accomplished by moving back the elevator to another location or simply extending its time.

§2.7.2 Surface Edit
After spending around 5 hours on the surface it's quite dull and nothing interesting happens. I believe a reasonable edit to this would be the addition of a larger civilian town which could result in an interesting third dimension CQB (Close Quarters Combat). This town would consist of buildings with windows and plenty of room for third dimension CQB to ensure that it isn't as similar to the hallways of the site. This would benefit the surface greatly and create additional areas for MTF and Chaos to explore.
Last edited: Mar 9, 2022

@Cloak @Hydro dont believe this has been looked at, he seems like a great fit for mapper in my opinion.

good luck on your app !

I have worked with Nils across a number of communities and he has always produced quality maps, which have been criminally underused. Nils is exceptionally mature for his age and most people that meet him assume he is years older than he actually is (me included). In addition to this he is a great staff member and a good team player. Civil Gamers would be lucky to have him on their team.

Application Accepted​
Nils has been brought on to the mapping team as a trial developer.​